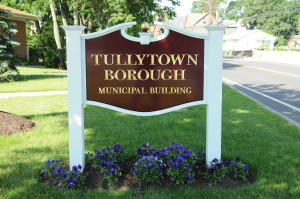 Tullytown Borough follows the Pennsylvania Code for Boroughs and has a Council comprised of seven (7) members, and Mayor. Council is responsible for creating and adopting all ordinances and policies necessary for town government to operate. It also establishes appropriate boards, commissions, and committees and makes the appropriate appointments.

Council sets the annual budget and approves all expenditures except where clearly delegated.

Council meets the first Tuesday of the month at Borough Hall 7:00 p.m. A quorum of four (4) members is needed to hold the meeting. A majority vote of the council members present is necessary to pass a motion or resolution.

The Mayor is responsible for the Police Department and its personnel. He is present at Council meetings but votes only to break a tie vote of Council. He also runs the Reorganization Council Meeting until a new president of Council is elected.

Council members and the Mayor are elected to four (4) year terms. The Council is elected on a rotating basis so every two (2) years some positions are open for election.

The Police Chief is appointed by Council and reports to the Mayor. He is responsible for enforcing local, state and federal laws and handles the administration.

Borough Secretary is appointed by Council and reports to Council. (S)He shall be responsible to keep full minutes of the proceedings of Borough Council; shall preserve the records and documents of the Borough; is custodian of the Borough Seal.

Borough Treasurer is appointed by Council and is responsible to maintain a just accounting of all receipts and disbursements and to report annually to Borough Auditor.

The Tax Collector is elected to the position every four years. (S)He is responsible for collecting the real estate taxes as well as the portion of the mercantile tax.

The Zoning Officer is appointed by Council and is responsible for making the initial determination of whether a property usage meets the zoning code. Where it does not and requires a variance (s) he administers the procedures, convening the Zoning Hearing Board and following up any appeals proceeding. (S)He also handles the land development and sub-divisions requests, convening the Planning Commission and Zoning Hearing Board as appropriate, and following up any appeal proceeding.

The Building Inspector receives all renovation and construction plans to assure compliance with Borough, County, State and Federal building codes prior to issuing building permits. (S)He performs the building inspection as the work progresses and issues the final Usage and Occupancy permit.

The Code Compliance Officer investigates possible violations of the property code and issues violations and citations as required.

There are vacancies on the following committees:


For more information, Tullyown Borough residents may contact Pat Marks at
(215) 945-5290 or by email at [email protected].

If you have a water or sewer emergency, please call: